What if the Christmas Story is True?

If the Christmas story is true, God bursts in to human history. Oh, he had participated in history before, many times. But this event was different. He didn’t cause a worldwide flood or rain down fire and brimstone or part a sea. This time it was personal. Intensely personal. God became a man. 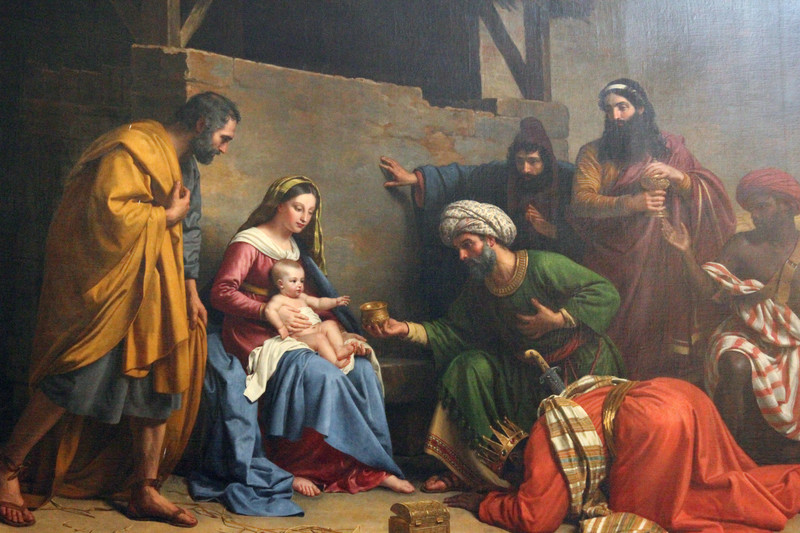 He was conceived miraculously in the womb of a young maiden. There hidden in her womb he started life no bigger than the period at the end of this sentence.

Go back and look at it. See how tiny God was.

No one knew except his mother, Mary, and foster father, Joseph and about a zillion angels.

And he grew in her womb. Just like you and I did. What was he thinking? Maybe he sucked his thumb. Maybe you did, too. Then one day he was born. Still almost no one knew. Just Mary, Joseph, and a few animals. So about a zillion angels sang and a few shepherds heard and they went to investigate. Now a few more folks knew.

He grew up and was an obedient child. Fancy that. Jesus knew he was king of the universe, but he didn’t puff up. He humbly submitted himself to Mary and Joseph. One of the neighbors should have figured something was up. No child could be that good.

One gospel story tells us of a time when Jesus wrote in the dust. His finger touched the earth. Though it wasn’t the first time Jesus touched dirt, it’s the first time it is written about. The next time will be when he falls to the earth during his passion. Just by touching, walking, and falling upon the dust of the earth, Jesus blessed it. And not just the dust of Galilee was blessed, but the dust of the whole earth. The dust that we walk on today was blessed by Jesus. It’s something to think about when you go outside.

Jesus drank water and wine. He ate bread and meat. As a babe he may have sucked his thumb. He worked with his hands and by the sweat of his brow. He wore clothes. He celebrated with the community. He wept for his friends. He suffered cruelty and injustice. And he died.

This is what the Incarnation means. In flesh.

This is why Christians do not despise the flesh. For flesh was not only created by God but also inhabited by him. Inhabit is an inadequate word though. For the body was more than a house for Jesus. It was Him. And is Him for all eternity: Christians believe the incarnate Godman, Jesus, is in heaven.

This is why Christians, when they are at their best, strive to make all things holy. Their bodies are more than just houses for their souls, so they are inspired by the Incarnation to use their bodies in a wholesome manner and to bear their pains with courage. They are further inspired by the Incarnation to use the goods of the earth AD MAJOREM DEI GLORIAM – All for the Glory of God. Christians are called to be good stewards of the earth.

Yes, Christians often fail to live up to their Incarnational calling. But when they do live up to it, great cathedrals are built. So are schools and hospitals. The hungry are fed, the naked are clothed, and the prisoner visited. Innocents are rescued. Great laws and rights are enshrined. Great men rule and just nations rise.

And Christmas is the time to remember our calling and that it all starts with God when he became, for a moment, no bigger than the period at the end of this sentence.

“And the Word became flesh and dwelt among us.” John 1:14