This is the time of year when parenting magazines urge frazzled parents to create family traditions with their children.

The articles are very helpful with detailed instructions which involve buying stuff from different stores and then making a craft with your kids that droops or doesn’t stand up right so to fix it you burn your hand with a hot glue gun which causes a trip to the emergency room and costs you five hundred bucks.

I am a certifiably craft-challenged person. When I attempted crafts with my children, my handiwork always fell short, which made me cross and grumpy. At times, I have even been known to yell things like, “I hate Christmas.” I hope my kids don’t wind up in therapy.

Anyway, when my children were young I always kept trying. I looked for no-stress, cheap, craft-free family traditions. The emphasis was on no-stress. If something was cheap but a lot of work, I didn’t do it. On the other hand if something cost a little bit more than what I wanted to spend but it was stress-free, I did it. As the years passed, I accumulated a nice little repertoire of family traditions. 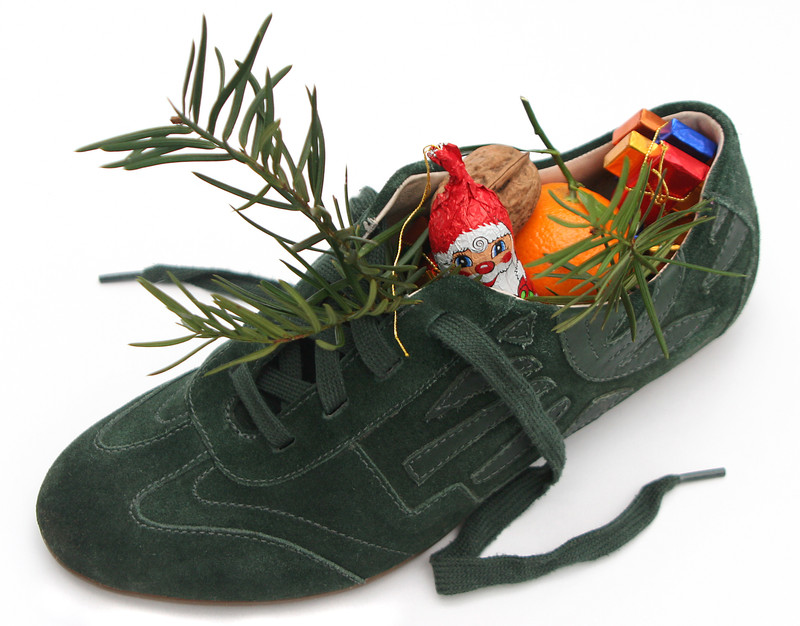 Next week, December 6th, is St. Nicholas Day. This was one of my favorite days with my children. Originally, I got the idea to celebrate it from a friend who buys each of her children a little gift and puts them in their stockings.

The first year I tried it, I had Lauren and Kitchie, then seven and five, put their shoes outside the night before like Dutch children do. I purchased what I thought was a nice old-fashioned gift — wooden boy and girl dolls with wooden clothes to peg on — and placed them in their shoes. I don’t know what I was thinking. The gifts were way too expensive and why was I buying dolls for my boy? Anyway, Lauren and Kitchie enjoyed the surprise, but not much. Children today receive so much — you can’t buy a hamburger without getting a toy — that the dolls were just one more toy in a sea of gifts.

Then my friend told me she also bought yogurts and special breakfast foods for her children, which they didn’t normally eat.

So, the following year, I again had Lauren and Kitchie put out their shoes. I rose before dawn and spread a red tablecloth on the floor of our living room in front of our glittering Christmas tree. Then I went outside and filled their shoes with special treats. There were gourmet cheeses, a round loaf of sour dough bread, little sausages, cartons of juice, oranges, and a little Christmas candy.

Lauren and Kitchie had already awakened and were waiting excitedly in Lauren’s room giggling and whispering to each other. When all was ready, I turned off all the lights in the house, except for the Christmas tree, and lit a candle in an old-fashioned storybook candleholder.

My children immediately pretended they were still asleep. I “awakened” them and we tiptoed down the dark hall illuminated by candlelight. They opened the front door and I held the candle high as they bravely ventured into the cold, dark, December morning to retrieve their shoes and goodies.

We took our bounty into the family room and spread our feast out on the tablecloth by the beautiful tree. Lauren and Kitchie loved our St. Nicholas picnic and happily ate while I read the story of St. Nicholas by candlelight.

Nicholas was a 4th-century Catholic bishop, in what is now Turkey, who did many kind deeds for his fellow man. One story is that he saved three sisters who were to be sold into slavery for want of dowries. He tossed a pouch of gold in the house for the first sister and she was soon able to find a husband. He did the same for the second sister and then the third. With the last daughter, the father watched to see who had been tossing in the gold, and on discovering it was Nicholas, confessed and repented his sins.

For an extra treat, the children got to open one of the “poppers” on the tree. Poppers are small wrapped gifts that make a popping sound when you open them. You can buy them already made from gift catalogues or make them yourself out of empty toilet paper rolls and cap gun strips.

I never make them.

Our celebration continued as we went to morning Mass.

By the way, St. Nicholas is the only Santa my children ever knew. But that’s another story.

One further note about starting family traditions: Beware. The kids hate it when you deviate from them and are long in forgiving you when you fail. One year, when my children were 13 and 11, I was busy setting up our parish’s Perpetual Adoration chapel. I was working night and day to have it ready to open at midnight on December 31st at the turn of the millennium. I knew St. Nicholas Day was approaching, but since my kids were older, I didn’t think they would mind skipping it.

The morning of St. Nicholas Day, I went out early for coffee to discuss the chapel with some volunteers. When I got home, I had you-know-what to pay. My kids were furious; I had betrayed them. Of course, I apologized profusely, but I must admit that later I wondered at the monster I had created.

They did get over my failure eventually, but I don’t believe we ever did celebrate the feast again. Today my daughter is away at college and my son is a senior in high school. Hmmmm, maybe now would be a good time to resurrect the tradition and surprise them. Any ideas?